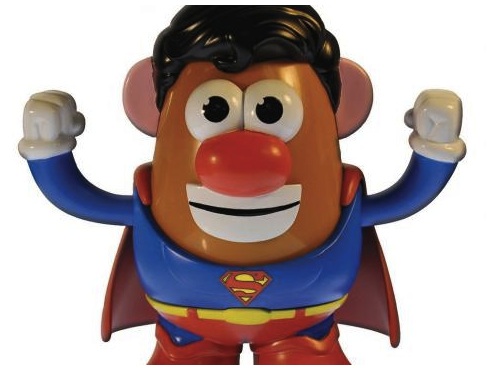 The first one being released is Batman (aka "The Caped Cru-tater") this summer, timed to the release of The Dark Knight Rises in theaters July 20. Superman — with his trademark twirl of hair — and Wonder Woman, who is sporting a classic costume complete with truth lasso, will be available during the holiday season.

Even better for comic-book fans: More heroes and some villains from the DC Universe are being planned for release in 2013.

This year is the 60th anniversary of Mr. Potato Head, which has become a classic toy over the decades with its interchangeable limbs and accessories — a feature the DC Comics toys will have, as well.

Mr. Potato Head has made its way into many geek-friendly properties in recent years. There has been a popular line of Star Wars Potato Heads in stores and at Disney theme parks, Indiana Jones and Transformers spuds, and other superhero Potato Heads based on Iron Man and Spider-Man.