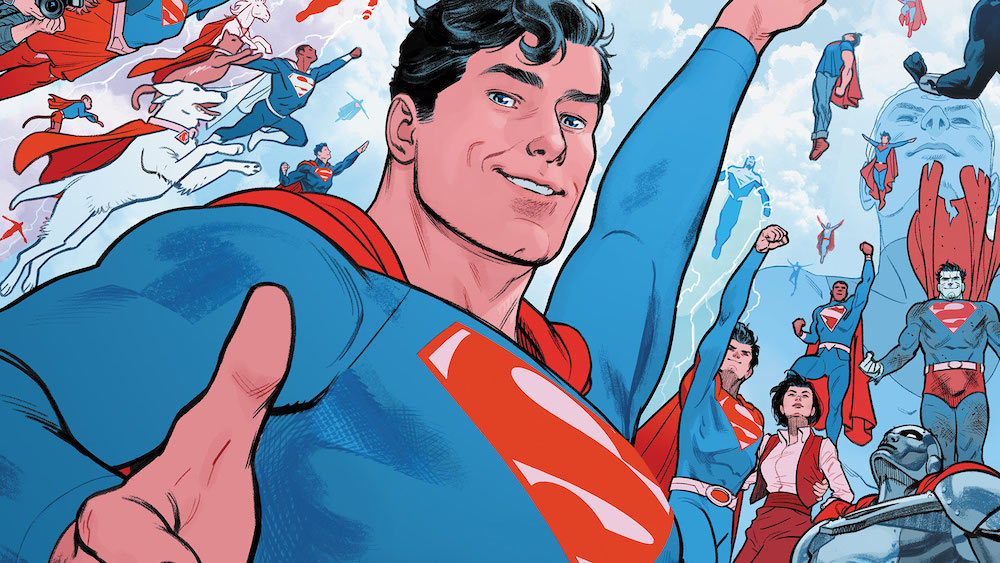 This is the final issue of the free-form anthology, featuring the ‘Metropolis Marvel’ in new stories, bedazzled in his signature colors. It’s the only place to see Superman chasing down headlines in a classic style and taking pause to reflect on growing up on a farm in Smallville. Not to mention, the return of Streaky the Supercat by superstar cartoonist Sophie Campbell (Teenage Mutant Ninja Turtles).

This issue of Superman: Red & Blue is available now in digital or print at Amazon for $13!

Superman is a superhero who first appeared in American comic books published by DC Comics. The character was created by writer Jerry Siegel and artist Joe Shuster, and debuted in the comic book Action Comics #1 (cover-dated June 1938 and published April 18, 1938).  Superman has been adapted to a number of other media which includes radio serials, novels, movies, television shows and theatre.

Superman was born on the planet Krypton and was given the name Kal-El at birth. As a baby, his parents sent him to Earth in a small spaceship moments before Krypton was destroyed in a natural cataclysm. His ship landed in the American countryside, near the fictional town of Smallville. He was found and adopted by farmers Jonathan and Martha Kent, who named him Clark Kent. Clark developed various superhuman abilities, such as incredible strength and impervious skin. His adoptive parents advised him to use his abilities for the benefit of humanity, and he decided to fight crime. To protect his privacy, he changes into a colorful costume and uses the alias “Superman” when fighting crime. Clark Kent resides in the fictional American city of Metropolis, where he works as a journalist for the Daily Planet. Superman’s supporting characters include his love interest and fellow journalist Lois Lane, Daily Planet photographer Jimmy Olsen and editor-in-chief Perry White. His archenemy is Lex Luthor, a mad scientist and ruthless businessman; his other enemies are Darkseid, Brainiac, General Zod, Doomsday, Metallo, and more.

Superman is the classic archetype of the “superhero” character: he wears an outlandish costume, uses a codename, and fights evil with the aid of extraordinary abilities. Although there are earlier fictional characters who arguably fit this definition, such as Zorro and the Phantom, it was Superman who popularized the superhero genre and established its conventions. He was the best-selling superhero character in American comic books up until the 1980s.