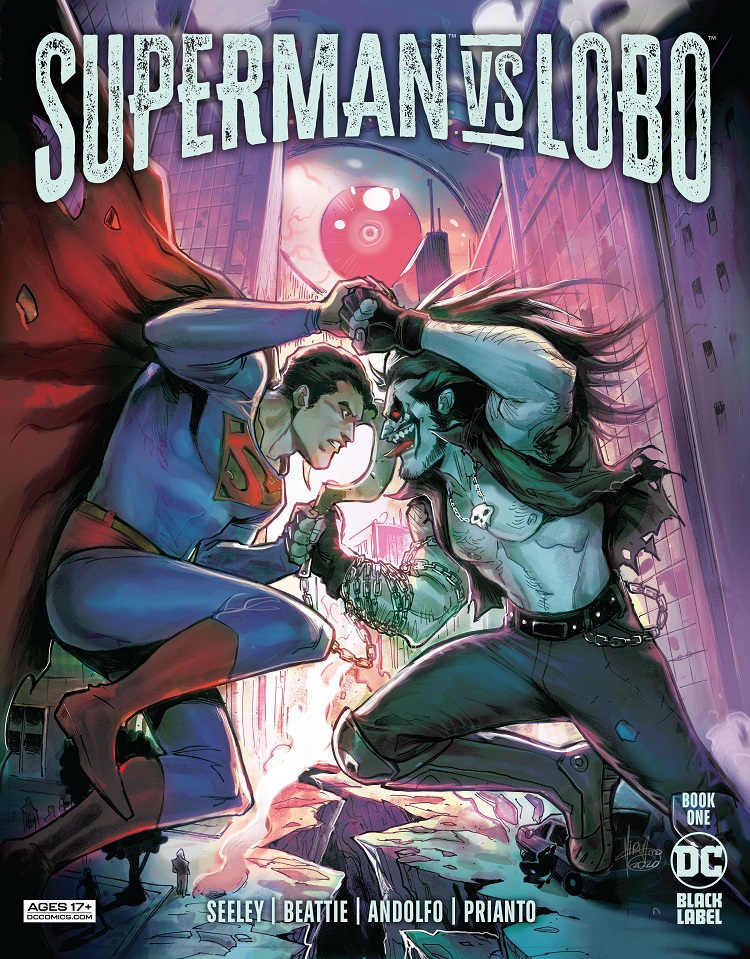 Superman fights for truth, justice and the American way. He’s a symbol of the very best in us, a champion of the helpless and oppressed, and just an overall nice guy.

Lobo, to put it ridiculously mildly, is not.

In other words, don’t expect them to trade bro hugs and beers when they come together in Superman vs. Lobo, the new DC Black Label series from writers Tim Seeley and Sarah Beattie and artist Mirka Andolfo. What can you expect? Lots of laughs, plenty of fights and more than a few guys getting fragged in creative new ways. After all, Seeley and Beattie are the minds behind Money Shot, the very NSFW indie hit about¦well, if you don’t know, we’re just going to let you google it and learn that yourself.

Superman vs. Lobo finds the two mega-powered aliens on a collision course as they contend with a jealous, but popular extraterrestrial named Numen and a mysterious doctor intent on studying both of them. Will the Man of Steel and the Main Man destroy the universe fighting with each other, or will they somehow find a way to coexist?

“My initial inspiration was the idea that some people think Superman is kinda uncool while Lobo is somehow cool, even though he’s a totally awful guy,” Seeley explains. “I reached out to my Superman vs. Lobo co-writer Sarah Beattie asking her about why Lobo is ‘hot,’ and I think we inadvertently did more therapy work than we intended.”

“Yeah, I hate it when you talk about Lobo’s a** for 20 minutes straight,” adds Beattie. “You need help.”

As a DC Black Label series, Superman vs. Lobo is largely free from continuity and content restraints. That means Lobo can swear all he’d like and, we suppose, Superman can as well (though he seems to have some real trouble with it in issue #1). Like with most Lobo comics, the miniseries is outrageous at times and plenty of fun, but Seeley’s quick to note that it’s not all jokes all the time.

“Sarah and I have crafted a dark buddy comedy and the laughs will fly,” he shares. “But it’s also going to make you think, and I’m pretty sure it’ll make ya weep at bit at least once. Also, there are going to be some epic cameos from across both Superman and Lobo’s histories.”

You can get a taste of what you’re in for with this exclusive sneak peek at the debut issue, which hits comic shops and digital retailers next week.