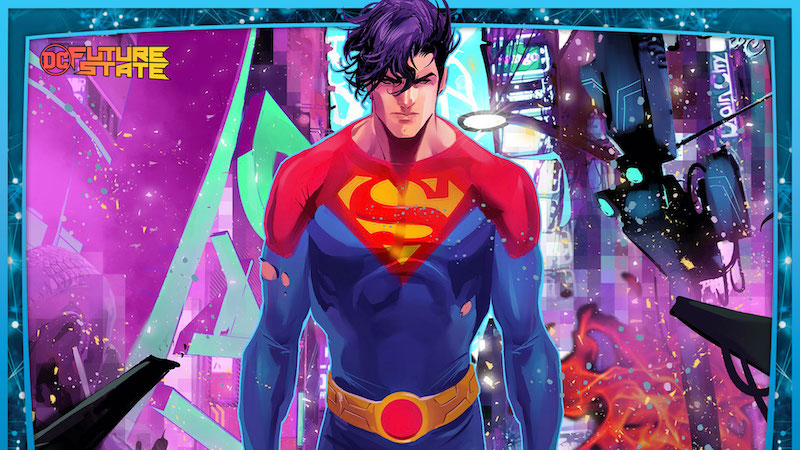 Welcome to DC Future State, a two-month extravaganza that reveals what lays in store for the World’s Greatest Heroes! Spinning out of the finale of Dark Nights: Death Metal #7 (on sale January 5, 2021), DC Future State will take you on a journey from the near future to the end of time to witness the destinies of heroes like Batman, Superman, Wonder Woman, the Justice League, the Teen Titans, and so many more.

What will change? For starters, our big three—Batman, Superman, and Wonder Woman—will tackle unexpected new roles even as younger heroes take their places. Some will find themselves in new, hostile territory; others will see their heroic missions turned upside down.

For Superman, the battle for truth and justice is a family affair. In DC Future State, the Man of Steel we’ve known all these years will make a bold decision to leave Earth in the care of a new Superman: his own son, Jonathan Kent, who’s returned to Metropolis from his time with the Legion of Super-Heroes. Kara Zor-El, meanwhile, has her own opinion of the new Superman’s approach to the never-ending battle for truth and justice!

In Future State: Superman of Metropolis, Jonathan Kent needs to adjust to his new role as Earth’s protector—and fast! Jon’s about to face a dangerous new mutation of Brainiac, and he’s decided to protect the city in a way no one would expect: by shrinking it, putting it under glass, and hiding it in the Fortress of Solitude. Creating the Bottle City of Metropolis may not have been Jon’s best decision…and Supergirl plans to show him exactly why!

“The biggest thing for Jon is learning the responsibility of it all,” says Sean Lewis, writer of the lead stories in Future State: Superman of Metropolis. “We usually think that means being able to make the right decisions. But it also has to do with risking the wrong decisions. Risking making mistakes.”

As the new Superman, Jon has a major reputation to live up to, and the people of Earth may not always be so accepting of this new hero.

“They aren’t always nice. There’s a little skepticism. A little hope,” says Lewis. “There’s definitely no apathy. Whether they believe in him or not they definitely

Why is the original Man of Steel leaving Earth behind, you ask? He’s about to undertake an arduous—not to mention dangerous—mission to Warworld in the Future State: Superman: Worlds of War. There, he will step into the gladiator ring under the watchful eye of Mongul. But Clark is no ordinary warrior, and his approach to victory will be nothing like what Mongul and his horde expect.

As Phillip Kennedy Johnson, writer of Future State: Superman: Worlds of War explains, “Superman is a symbol of hope, truth, and justice all across the Universe, and injustice is everywhere. I don’t want to spoil too much, but Superman becomes aware of an existential threat not just to Earth, but to pretty much everyone. He leaves Jonathan and Kara in his place, sets out to take down this threat, and…vanishes. Years later, we learn where he actually is. (Spoilers: it’s not great.)”

Mongul has been a longtime, powerful foe of the Man of Steel—but things have changed for this would-be conqueror.

“The Mongul we see now is actually the son of the previous Mongul,” says Johnson. “He may look similar, and is just as powerful and cruel as his father was, but he’s more cunning and thinks bigger—which Superman’s not prepared for. For the old Mongul, killing Superman was its own reward. For thisMongul, Superman is the means to an end. He has an endgame that’s bigger than anything we’ve seen from Mongul in the past, and for the first time maybe ever, Superman’s the underdog in the fight.”

Further into the future, Future State: Superman Vs. Imperious Lex brings back the world of Lexor. Under the leadership of Lex Luthor, the planet has been invited to join the United Planets at last. Will Lexor sign on the dotted line? That depends on what’s in the deal for Lex, of course. It’s up to Earth’s representative to the U.P., Lois Lane, to learn what Lex’s true goals are—with the help of her husband, Superman.

It was inevitable that Luthor would run his own world, but even for someone this brilliant, it has to be a challenge.

“Because they don’t pay much attention to where their planet’s prosperity comes from and because they only really know what Lex tells them, the people of Lexor see Lex Luthor as a sort of god-emperor and the epitome of everything a good leader should be,” says writer Mark Russell. “They have no idea how loathed he is outside of Lexor.”

Of course, it’s Lex Luthor, so there has to be an ulterior motive.

“For Lex, this is sort of a first,” says Russell. “He’s on a planet where he’s actually loved. He revels in getting the sort of respect that Superman got on Earth. And yet, he can’t help but be Lex Luthor, so even the genuine love these people feel for him is built on sort of a cursed graveyard. That cursed graveyard being that Lex sees their love of him as a means to an end, rather than an end unto itself.”

Things have changed for Kara Zor-El in the future. In leaving Earth behind, Superman’s hot-headed cousin has found a measure of peace as the new Superwoman. She’s taken up residence on the moon, along with an assortment of refugees from Earth and elsewhere. But when a spaceship crashes into their midst, the inner peace Kara has struggled to attain may be lost once more. We asked Marguerite Bennett, writer of Future State: Kara Zor-El: Superwoman, to tell us what exactly Kara is doing on the moon.

“Kara felt her entire life’s purpose was to protect Clark until he could protect Earth—that even though she was just as strong as he was, her duty was to aid him, instead of defending the Earth in her own right,” says Bennett. “As time passed, the mantle of Superman passed to Clark and Lois’s son, and Kara realized that this planet is never going to want her—at least not the way she had hoped. The moon represents a new place and a new start–a place where she can do good without standing in anyone’s shadow.”

Kara finds more than a new start on the moon, though. She also finds beings who truly need her. But that all changes with the incursion of…well, we’ll let Marguerite explain.

“The refugees on the moon are mostly people who have been displaced from Earth and need a safe haven,” she says. “Kara protects them from their enemies on Earth/whatever planet from which they originated, ensuring their safety, and offering her strength without condescension. She’s matured, made her peace with the things she will never be, and moved on. This crash—a frightened, dangerous youth burdened with an unbearable birthright—is a huge threat to the safety of the people of the moon and to Kara herself.”

Discover the destiny of the DC Universe!