What if Man of Steel was IN (True) COLOR? 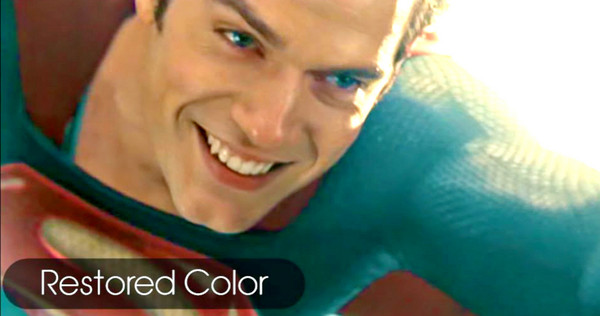 VideoLab attempts to turn back time and restore the natural color & brightness in shots from DC’s Man of Steel. Turns out there was a beautiful Zack Snyder movie hiding underneath the bleak coloring.

Would Man of Steel have been more successful at the box office if it wasn’t colored like Schindler’s List? What do you think?

LEGAL NOTE: All © & ™ footage belonging to Legendary Pictures, CBS, Warner Bros. Pictures, Columbia-EMI-Warner, & DC Entertainment is included as a criticism/commentary on filmmaking techniques and has not been reproduced for direct consumption.

PRODUCTION NOTE: We’re big fans of both Superman and the film Man of Steel. That’s why this was a fun project. But Superman isn’t just a brand. He’s a worldwide icon that has lasted 77 years. When you make a Superman movie, and not every kid walking out of the theater wishes they were Superman… you’ve done something wrong. We’re simply asking questions.

WORKFLOW: (For the curious) The results we achieved are obviously a bit oversaturated and contain contrast artifacts. Since our source footage already contained severe color-grading decisions, it was far from optimal and, at best, this is an approximation. If the raw footage had been colored in a more natural and pleasing manner, it would actually look SIGNIFICANTLY better than what you see here.

Synthetic Aperture’s Color Finesse and some color exclusion adjustments did most of the heavy lifting in our color correction and re-grade, but each clip required a cocktail of secondary corrections.

We did, in fact, put too much green in the savanna, brought to our attention by eagle-eyed commenters.

The orange-tinted sky in the Metropolis aftermath shots and the purple girders behind Zod were actually there naturally. We believe Man of Steel had a more traditional-looking color grade until later in post-production when they decided to go darker. They should have followed their first instinct.