TVGuide.com gives us our first look at Laura Vandervoort's final return to "Smallville" in the role of Kara, aka Supergirl, in the May 6th episode titled "Prophecy", in which she joins forces with Oliver Queen to find a way to remove the Omega symbol from his skull.

"Oliver is faced with this cold reality that he's not going to be able to get rid of this infection just by willing it away," Hartley tells TVGuide.com.

"He goes on this journey to try to get rid of it." Along the way, Kara and Oliver will "find out things about each other," he says, "that everything isn't what it seems, that you can't judge a book by its cover." Source: TVGuide.com. 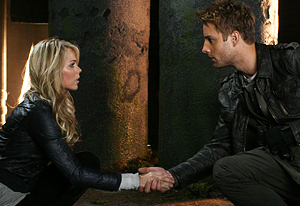