Going to the Chapel, Gonna Get Marrrrried (Smallville Style!)

TVGuide.com just posted a photo that suggests more than just Superman in the series finale of "Smallville". 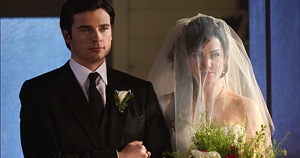 The May 13 series finale of Smallville promises major changes for Clark Kent, and not just his transformation into Superman. As seen in this exclusive photo, Clark (Tom Welling) and Lois Lane (Erica Durance) head to the chapel — but there's drama along the way. "It's a very, verylong walk down that aisle," teases executive producer Kelly Souders. "There are some good moments, some heart-wrenching moments and some surprising moments at their wedding."

Souders says that "if you keep your eyes open you'll see a few familiar faces" in attendance, including Ollie (Justin Hartley) as the best man and Chloe (Allison Mack) as the matron of honor. "They've always been there for our beloved couple and they will be all the way to the end."

Given that this is the final episode, should viewers be concerned that Clark may not get to kiss the bride and seal the deal? "I think fans will be pleased with how things turn out," Souders says, "but it's never what you expect. I will just say that there are moments directly before and after this photo that, even seeing the footage for the 50th time, I still get a little teary."

Smallville airs Fridays at 8/7c on The CW.