An Interview with the NEW Man Of Steel!

Cavill is a guy who has been on the cusp of superstardom for a while now.  He was almost James Bond.  He was almost Bryan Singer's Superman.  He even read for Batman at one point.  And yet, in each of those moments, someone else ended up playing the part.  Now, finally, on the strength of his work in "The Tudors" and the early buzz around his performance in "Immortals," it feels like Henry is having that moment.

Sitting down with him today, most of the conversation had to do with "Immortals," but we did take the time to talk about stepping into the suit of one of the most recognizable characters on Earth.  My impression of Cavill after spending a few minutes chatting with him is that he's a dynamic choice for the role.

We spoke a bit about Superman during our time together, and while we'll have our full "Immortals" conversation for you later, we wanted to share the "Superman" stuff with you immediately, since there's such intense curiosity about who he is and what he's going to bring to the role.

I already knew that with today's technology, we will believe a man can fly.  What's far more important is believing in him as a person, and I think in Cavill, Warner Bros. has finally found the man for the job. 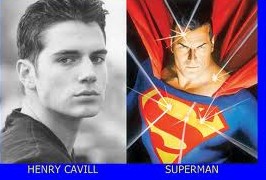