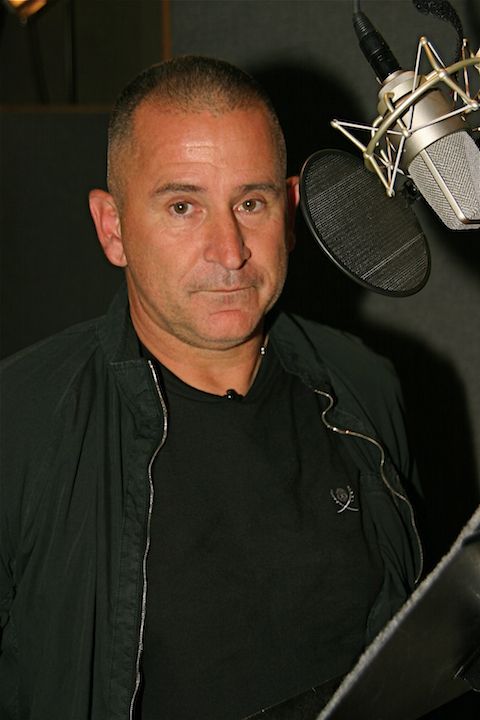 LaPaglia is known far and wide for his lead role on the CBS drama Without A Trace, but his fame goes well beyond those 160 episodes over seven seasons on the primetime series. LaPaglia's career highlights include an Emmy Award as Outstanding Guest Actor in a Comedy Series for his role as Simon on Frasier, a Golden Globe for Best Performance by an Actor in a Television Series/Drama for Without a Trace, and the 1998 Tony Award for Best Actor (Play) for the revival of Arthur Miller's "A View from the Bridge." He has also been honored with two AFI Awards as Best Lead Actor in the films Balibo (2009) and Lantana (2001).

In All-Star Superman, the Man of Steel rescues an ill-fated mission to the Sun (sabotaged by Lex Luthor) and, in the process, is oversaturated by radiation – which accelerates his cell degeneration. Sensing even he will be unable to cheat death, Superman ventures into new realms – finally revealing his secret to Lois, confronting Lex Luthor's perspective of humanity, and attempting to ensure Earth's safety before his own impending end with one final, selfless act.

All-Star Superman will be distributed by Warner Home Video as a Blu-Ray Combo Pack and 2-Disc Special Edition DVD, as well as single disc DVD. The film will also be available On Demand and for Download.

LaPaglia's career in television and film has already spanned a quarter of a century, featuring roles on TV series from Magnum P.I. and Trapper John, M.D. to Murder One and CSI; films like So I Married An Axe Murderer and Woody Allen's Sweet and Lowdown; and voicing animated characters for Happy Feet and Legend of the Guardians: The Owls of Ga'Hoole. He's had the chance to play a variety of real-life characters ranging from gangsters Frank Nitti and Lucky Luciano to Cuban leader Fidel Castro and college basketball coach Jim "Jimmy V" Valvano.

LaPaglia has belied his birth/upbringing in Australia with a chameleon-like array of roles, frequently playing New York-style cops and gangsters. However, away from the camera, he is quick to bask in his non-American roots as co-owner of an Australian Soccer club (Sydney FC) and playing goalie around the Southland, particularly for Hollywood United Football Team. A quick conversation with the actor reveals his true passion is between the posts.

QUESTION: What were the challenges of creating Lex Luthor as an animated voice?

ANTHONY LAPAGLIA: You have to understand the medium that you're in. As opposed to (on-camera) acting with another individual where it requires listening in order for you to respond, here you're having to create the question the other person would ask you in your head and then respond to it. It's a much more difficult process because there's a line between it being real and it being animated. There's a slightly different tonal quality to the way you say things, or in the way you have to make it bigger sometimes than you would naturally do in order to sell it. But not having the visual in front of you – you're kind of shooting in the dark a lot.

QUESTION: Did you enjoy this incarnation of Lex Luthor?

ANTHONY LAPAGLIA: Yeah, I did actually. I found it surprising that Lex Luthor was getting a bit spiritual (laugh). I guess it's kind of like a sign of the times where he's trying to get in touch with the inner Lex. (laugh)

QUESTION: Can you talk about the journey Lex goes through in All-Star Superman?

ANTHONY LAPAGLIA: The journey Lex Luthor takes in this film – in the beginning it's what you'd expect: he's interested in power and world domination and Superman is the bane of his existence. And then as it progresses, there's a slight injection of humanity, which is surprising to Lex Luthor that he's even experiencing feelings that are remotely human. So it kind of gives him an unusual arc. He definitely has more dimension to him in this film.

QUESTION: What do you bring to Lex Luthor ?

ANTHONY LAPAGLIA: As a kid, I loved comic books. It's basically how I learned to read as a kid because my mother would buy them for me to keep me quiet, I think. I remember one time particularly – I was 4 or 5 years old, and I was sick and I had to stay in bed for three weeks, and so she would buy me comic books every second or third day. And I just created my own world, sitting under the covers reading Superman, Batman, Silver Surfer, a lot of the great comics.

QUESTION: What is it about Lex Luthor that most appeals to you?

ANTHONY LAPAGLIA: There's a kind of sarcastic streak in Lex Luthor that comes from that extreme confidence in his ability to do what he does. I like the attitude of him. I like that nothing really fazes him, that he feels like he has complete control over everything, therefore, he can be relaxed enough to be a smartass. A good Lex Luthor makes or breaks it for me, I think.

QUESTION: As you've played so many villains, do you prefer being the bad guy?

ANTHONY LAPAGLIA: I've always liked playing the baddy. Some people have a problem with getting typecast. I'm quite happy with being typecast. I don't care, as long as you're working. The truth is you could play every bad guy in a one dimensional fashion, but it's like everything else in life – everything's different and everyone's unique, so you have to find the uniqueness in the character to bring it to life.

QUESTION: You've obviously performed in every medium available, but voiceover is relatively new for you. Does voiceover work offer you challenges or joys of acting that you don't get elsewhere?

ANTHONY LAPAGLIA: I like the isolation part of it. I like that there's a certain amount of freedom, and that you're not waiting for somebody else to find their motivation. It's more challenging to come up with a believable character doing animation work than it is (in live-action). Acting is relatively easy because you have a personal one-on-one interaction with someone, therefore whatever you're doing is a lot smoother. This requires a bit more patience and you have to suspend the fact that you're in a sound stage and really commit to the material.

QUESTION: You had a moment where you weren't understanding Andrea Romano's direction on a particular emotion, and Bruce Timm was able to draw Lex Luthor with an expression that depicted that emotion. Have you ever gotten direction via artwork before?

ANTHONY LAPAGLIA: That made me laugh. We were trying to get that particular passage done right and I didn't quite know how to get it. It's not an uncommon issue where you have three or four people that have three or four different takes on what it should be – it gets a little confusing sometimes if you're doing it and you're taking in all the different stuff. You want to deliver what they want but sometimes you're not sure how to quite get there. And I thought that was ingenious, actually, showing me the picture through the glass of the expression on Lex Luthor 's face. It made perfect sense – Bruce is an animator. That's what he does – so he was able to show me visually what he was looking for in my voice. I could actually see Lex's mental state of anguish. It actually made me think of doing it a different way and that ended up working.

QUESTION: You've earned a Tony Award, an Emmy Award and a Golden Globe — does one of those honors mean more to you than the others?

ANTHONY LAPAGLIA: To be honest, after a certain period of time they're just kind of like objects in your closet. I think that, of all of them, the one that kind of means (more) was the Tony Award because doing theatre is way, way, harder than doing anything you'll ever do on film or television. It's about real discipline. You have to go in and do eight shows a week whether you feel like it or not and, in the case where I won the Tony, it was in one of those shows where you could never phone it in. It just didn't work if you phoned it in. So, come hell or high water, I did it for a year – which is a long time to do eight shows a week. I think I missed about five in a year. Also, I think (the Tony Award) meant probably the most because it's where I started. It's kind of what I admire the most. Theatre is what I find the most challenging. So I would say that the Tony kind of meant more. But the others are nice, too, you know (laughs).

QUESTION: How much does a background in the theatre help in the voiceover booth?

ANTHONY LAPAGLIA: The theatrical background helps you in doing (voiceover) because you've already been through a hundred different acting classes where you've had to sit on a black box and pretend that you were a lemon or an imaginary cup of coffee or whatever. There's always a part of that program that requires you to strip yourself bare and be an idiot. And if you're not prepared to do that, then you have no place being there.

QUESTION: You had quite a lengthy list of unglamorous jobs before becoming an actor. Pro soccer player, teacher, shoe salesman, furniture restorer, sprinkler installer. And now you're an award-winning star voicing a super villain for an animated film. How does it all tie together?

ANTHONY LAPAGLIA: Well, that's glorification. I used to dig the trenches for the guy who actually installed the sprinklers. I just did the digging (laughs). I had no idea that I would be doing what I'm doing now when I was a kid. When I was a kid you could've said that I was going to be an astronaut and that would have been more realistic than doing this. So I think it ties together in that I don't really have any expectations or feelings of how things should go anymore. They go how they go and you've just got to roll with it. And I think it's your ability to roll with it that keeps you in the game. It's also your ability to recognize when it's changing and how you need to change with it if you want to. And I'll tell you that from the minute I decided what I wanted to do, it's all been gravy from there. It's what I want to do. Whether I'm successful or not at it, it's what I chose to do. It wasn't what somebody told me to do, so everything that comes out of it is just a bonus.

QUESTION: OK. But if you could do it all over again, what would you choose – acting or soccer?

ANTHONY LAPAGLIA: That's a tough one. What level of football? (laugh) Well, if I could play in Italy for a five-year career, I'd swap it. Absolutely. People don't realize how huge football players are in other parts of the world – compared to them, actors and musicians are nothing. They're doormats. You walk through Rome with Francesco Totti and I don't care who you are – nobody's going to notice you because Francesco Totti is God. It's hard for people to conceive in this country just how important the game of football is culturally in Europe and South America, and even Asia. It's religion; it's life; it's everything.