Jerry Seinfeld gives his opinion on “Man of Steel”

Jerry Seinfeld, undoubtedly the most well-known Superman fan, gave his opinion of Man of Steel to an open panel on Reddit. 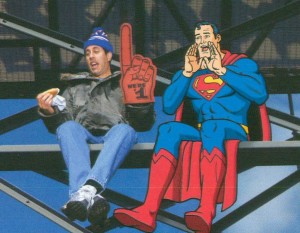 As you may know, every episode of the Seinfeld series had included a reference to Superman.

Overall, Seinfeld wasn't big on all the violence in the movie.

I was so happy that they made another Superman movie! I'm really reluctant to be critical of it in any way. But I thought the glossing over of the figuring out a secret identity and why he felt he needed one was a huge missed opportunity for that character, and one of the most interesting things about Superman is the whole secret identity. So to me it was too much action / violence and not enough character study.

Seinfeld also offers what Superman memorabillia/comics he has in his personal collection.

I have a few old Supermans with the Curt Swan art from the 60's. But nothing impressive. I have a really nice model of Kal-El being loaded into the rocket and then another model of the rocket landing in from of Ma and Pa Kent. Those are my best Superman collectibles.

And regarding Seinfeld's favorite supporting actor? It's Newman! Newman is the villain to Seinfeld much like Luthor to Superman!

Newman would be my favorite supporting character. I mean, when I got to have a real evil nemesis like Superman would have, that was a dream come true for me. There's no superhero that doesn't have an evil nemesis, and I got to have one. And I love that nobody ever asks "Why didn't you like Newman?"

No one ever asks me that, and no one ever questions it. There was no reason, but it was just fun.