Fighting For Truth, Justice, and the KRYPTONIAN Way?!

It's "Truth, Justice, and the American Way" no more, as Superman renounces his U.S. citizenship within the pages of "Action Comics #900" 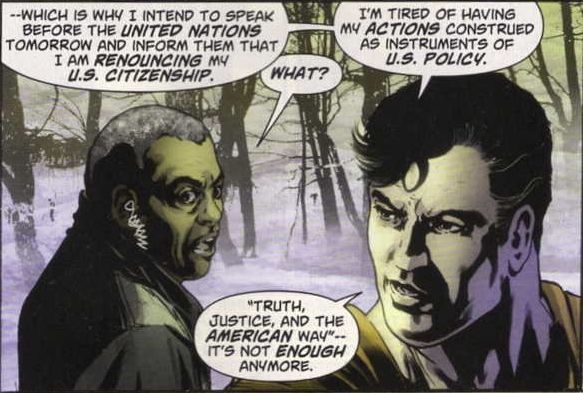 The key scene takes place in "The Incident," a short story in Action Comics #900 written by David S. Goyer with art by Miguel Sepulveda. In it, Superman consults with the President's national security advisor, who is incensed that Superman appeared in Tehran to non-violently support the protesters demonstrating against the Iranian regime, no doubt an analogue for the recent real-life protests in the Middle East. However, since Superman is viewed as an American icon in the DC Universe as well as our own, the Iranian government has construed his actions as the will of the American President, and indeed, an act of war. Superman replies that it was foolish to think that his actions would not reflect politically on the American government, and that he therefore plans to renounce his American citizenship at the United Nations the next day — and to continue working as a superhero from a more global than national perspective. From a "realistic" standpoint it makes sense; it would indeed be impossible for a nigh-omnipotent being ideologically aligned with America to intercede against injustice beyond American borders without creating enormous political fallout for the U.S. government.