MARTHA KENT COMES HOME — Clark is surprised to see Martha on the news speaking at a pro-vigilante rally. However, surprise quickly turns to horror when he and Lois watch as Martha gets shot on national television. Meanwhile, Lionel reveals himself to the world and reclaims LuthorCorp from Tess and Oliver. Lois and Chloe decide to cheer Clark up by showing him videos from thousands of vigilante supporters professing their support for The Blur. Posted on KryptonSite. Mike Rohl directed the episode written by Don Whitehead & Holly Henderson. 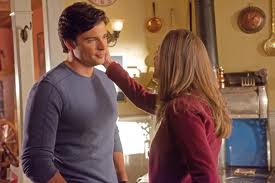