What A Police Car Wrapped Around Superman Would Look Like.. 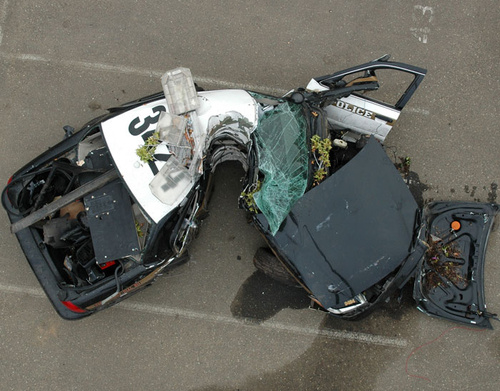 The word "miraculous" scarcely describes the survival of a Santa Maria, California police officer who wrapped his Ford Police Interceptor around a tree Sunday morning. It's what the local Police Chief calls the "worst accident he's seen in 35 years."

Sunday was a busy day for the members of the Santa Maria Police Department, starting with a police chase that resulted in a stolen car crashing into a first grade classroom of a local school. But that's not where this amazing crash happened.

Hours later, Officer Damon Badnell was responding to an officer involved in a foot pursuit of a burglary suspect when he lost control of his vehicle on a slippery road. The momentum wrapped the vehicle around the tree, nearly bisecting the Ford Crown Victoria.

Officer Badnell, who recently was awarded for stopping the most drunk drivers, has a few broken bones but doctors are hopeful about his recovery.