"Lionsgate has picked up Action No. 1, a heist comedy from writers and Reno 911 creators Robert Ben Garant and Thomas Lennon. The duo is also producing along with Peter Principato and Paul Young. The story centers on a group of nerds who attempt to steal Cage's copy of Action Comics No. 1, the landmark 1938 comic that introduced the world to the Man of Steel. 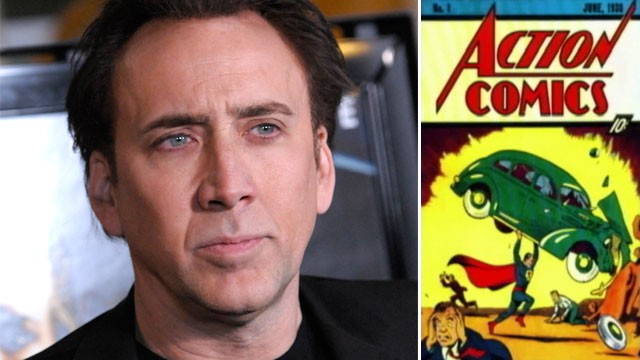 The theft of Cage's copy of Action Comics No 1, the landmark 1938 comic that introduced the world to the Man of Steel, made headlines around the world in 2000. Thieves apparently broke into the Oscar-winning actor's home in Los Angeles and swiped the comic from its security frame on a wall along with two other priceless collectors' items. It did not resurface until April 2011, when it was found in an abandoned storage locker in California's San Fernando Valley by a man who had purchased the contents of the locker.

The Hollywood version has been written by the creators of the Reno 911! TV series, Robert Ben Garant and Thomas Lennon, and reportedly takes the form of a heist comedy in which a group of fanboys break into Cage's home and steal the comic. The screenplay was written with Cage in mind to play himself, but the Hollywood Reporter says the actor is currently not attached. Jason Statham is said to be considering one of the lead roles, though not as Cage. When the stolen comic eventually turned up in 2011, it arrived just in time to help the actor with his financial travails, which saw him face bankruptcy for failing to pay taxes despite having earned more than $40m in 2009. Cage sold the item for a record-breaking $2.16m in November.

There are said to be between 50 to 100 copies of Action Comics No 1 in existence, but Cage's copy was one of the two best-preserved known to experts. The actor is an avid comic book fan and even named his son Kal-El after Superman's Kryptonian name in 2005. Garant and Lennon are on board as producers but the film so far has no director attached and there are no other casting details.