Where next for Warner Bros' animated adaptations of DC Comics' storylines after this month's Batman: The Dark Knight Returns Part 2? Up, up and away, apparently, as White Collar's Matt Bomer voices the Man of Steel for this Spring's Superman: Unbound. 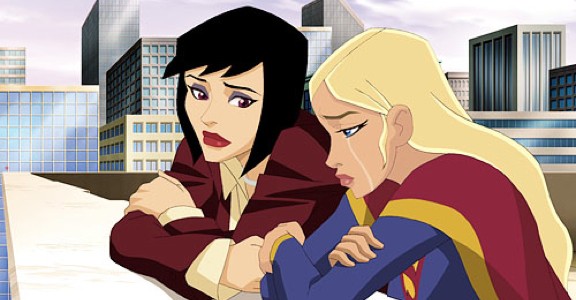 Based on Geoff Johns' "Brainiac" storyline from the writer's Action Comics run with artist Gary Frank, Superman: Unbound features Superman facing off against the alien who has traveled the universe, stealing cities from planets before their destruction. "He's the ultimate collector," explains the movie's director, Batman: The Brave and The Bold's James Tucker. "he says what he's doing is [in] the name of science and ultimate knowledge, but really he just wants stuff and he doesn't want anyone else to have access to it." Talking to TV Guide, Tucker explained his admiration of Bomer's performance as everyone's favorite big blue boy scout. "He had a jovial energy that was a little counter to what we usually do with Superman," the director explained, "but he also had that decency in his voice that Superman really needs no matter which way you go with him." He was equally effusive in his praise of Fringe's John Noble, who voices Brainiac. "I could listen to him all day… [He] had a lot of energy and he really got into the psychology of what was motivating Brainiac. He brought a level of intelligence, but also that slight bit of crazy that a super villain needs to have under the surface to make him compelling." Bomer and Noble aren't the only familiar voices in the cast; Castle's Stana Katic and Molly Quinn also show up, providing the voices for Lois Lane and Supergirl, respectively, in a subplot concerning Lois' relationship with Supergirl as the romance between Clark and Lois gets more serious. Superman: Unbound will be released on DVD and Blu-ray later this year.