The ‘Word’ in Plano, Illinois

The town of Plano, Ill., has a different look these days. It has been transformed for the filming of the new "Superman" movie.

The skies in the far western suburb are not just filled with birds or planes but with movie helicopters as the town is cast as "Smallville" in the film.

"We've had large helicopters with camera guys handing off of them buzz our house. They come over here doing scenes. It's been really exciting," said Christina Escobedo, Plano resident.

Although most of the filming of "Superman: Man of Steel" is blocked by huge screened fences, around three blocks of the town's historic district has become a movie set. The secrecy has left some fans of the comic book icon disappointed.

"You get what you can get, but yeah, that's how it is," said Joachim Jacson, Geneva resident.

Town leaders say Plano was selected because it best matched the image of Clark Kent's hometown and was also used when Larry the Cable Guy filmed his 2007 movie, "Witless Protection."

"In the long run, the economic advantage Warner Brothers has presented us is huge," said Rich Healy, Plano Chamber of Commerce president.

Last week, the Warner Brothers production rolled into the town of just over 10,000 with its $175 million budget and a cast of A-list celebrities.

"We wanted to see Russell Crowe. We saw him in Naperville one day," said Carol and Leon Shalla, Naperville residents.

Filming has temporarily shutdown 15 businesses in downtown Plano all week including Marlene Kee's Office Works. But she doesn't seem to mind.

"They have bought everything they needed. If I can supply it, they've bought it from me," said Kee.

Plano's mayor has been cast as an extra along with about four dozen other residents as the actual filming continues.

"Today we could see the director out the back windows of the alley, so that was exciting," said Deanna Howard, Plano community library.

Of course not everyone is thrilled.

"I have to give people directions to go around Center Street and they are like, 'wait, what?'" said Nina Swistara, Plano resident.

Even before the movie hits the theaters, town leaders hope to capitalize on the excitement by opening a Smallville museum. 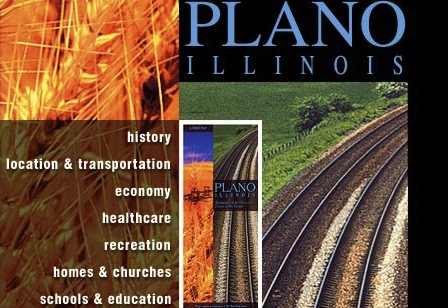