Is it wrong to rute for the other guys?! If so, I don't want to be right!

I can't wait to see this movie! 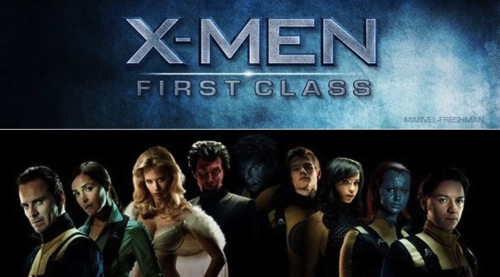 X-Men: First Class is an upcoming 2011 American superhero film directed by Matthew Vaughn. It is based on the characters appearing in Marvel Comics and is the fifth installment of the X-Men film series and prequel to X-Men. X-Men: First Class is scheduled for release on June 3, 2011.

The film is set in 1962 and will focus on the relationship between Professor X and Magneto and the origin of their groups, the X-Men and the Brotherhood of Mutants. The film stars James McAvoy as Professor X and Michael Fassbender as Magneto. Other cast members include Kevin Bacon, January Jones, Rose Byrne, Jennifer Lawrence, Zoe Kravitz, and Lucas Till. The film was mostly shot in England and parts of the United States. Fox envisions this film as the first in a new trilogy.

Before Charles Xavier and Erik Lensher took the names Professor X and Magneto, they were two young men discovering their powers for the first time. Before they were archenemies, they were closest of friends, working together, with other Mutants (some familiar, some new), to stop the greatest threat the world has ever known. In the process, a rift between them opened, which began the eternal war between Magneto's Brotherhood and Professor X's X-MEN