When Smallville returns with new episodes on April 15, a special guest star will be there! No, he's not a ghost, it isn't a flashback, and no one is dreaming! Jonathan Kent is alive! But not the one from this reality!

CLARK RETURNS TO THE ALTERNATE UNIVERSE AND RUNS INTO JONATHAN — Clark (Tom Welling) is shocked to find a mirror box in the barn.  Clark Luthor surprises him and sends Clark Kent back to the alternate reality where Clark runs into a very angry Jonathan Kent (John Schneider).  Meanwhile, back in our reality, Clark Luthor visits Tess (Cassidy Freeman) and tells if she doesn’t side with him he’ll kill her.  Lois (Erica Durance) asks Emil (guest star Allesandro Juliani) to help her bring Clark back. 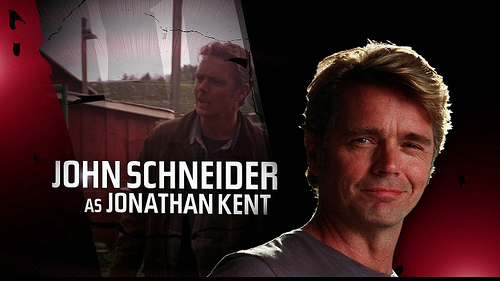