Michael Rosenbaum talks about his last scenes on Smallville!

Zap2It.com has published an interview with Michael Rosenbaum in which he discusses coming back to "Smallville" to play Lex Luthor for the series finale. Here's a portion of the interview…

Rosenbaum and Welling had a great time working together again. "Tom and I had a wonderful time together," he tells us. "We laughed a lot. I shot a couple of scenes with him."

It wasn't all laughter, though. Fans are going to have a very emotional finale experience come May — and they're not the only ones. "I shot for 19 hours, and honestly, I had a tear in my eye at the end. I was like, 'Man, this is really it,'" Rosenbaum says wistfully.

Rosenbaum says he thinks that the final scenes between Clark and Lex are "excellent." He was warmly welcomed back on the set by old friends. "It was so great. I went up there and guys that weren't even working on the show anymore came to set to hang out. One guy brought me a joint," he jokes. "I mean, it's a real family."

Read the complete article at Zap2It.com. 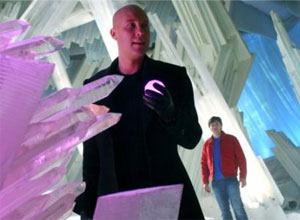