Is Hamm the Man??

ThinkMcFlyThink.com has indicated that sources have told them that Jon Hamm (Mad Men) is being "seriously considered" for the role of Superman in the upcoming franchise reboot: 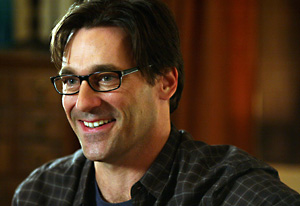 With plans set for a December 2012 release, we've heard different names out in the open ranging from "Chuck" star Zachary Levi in the rumor mill department to "True Blood" actor Joe Manganiello publicly campaigning for the role. But who do the studios (in this case, Warner Brothers and Legendary Pictures) have their eye on for mild-mannered Clark Kent and his red-and-blue suit wearing alter ego, or is it the other way around?

At thirty-nine (he'd be past forty when "The Man of Steel" opens), he's certainly older than who's regularly looked at for these franchises. Then again, look at Robert Downey Jr. He's starring in the "Iron Man" and "Sherlock Holmes" films (and then there's "The Avengers") and he's a few years older. Not to mention, Hamm happens to have been a fan favorite for Kal-El for years now. Something that was suggested to him directly by MTV and it wasn't like he immediately dismissed the notion.

While this is interesting news, keep in mind that rumors of who will portray the Man of Steel have been swirling for months now with such actors as Zachary Levi (Chuck), Joe Manganiello (True Blood) and even "Superman Returns" star Brandon Routh being considered for the lead role.

Neither Warner Brothers, Legendary Pictures or members of Christopher Nolan's camp have confirmed or denied any of the rumors surrounding the new film. All that is known for certain at this point is that Superman will return to theaters during the 2012 holiday season.